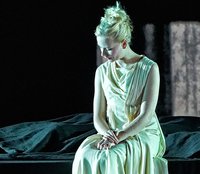 her career during her studies

in Vienna, when she was

invited to sing at the

After finishing her „Magistra Artium“ at the Univ. of Music and Performing Arts Vienna in 2009, she travelled to Japan with the Strauß Ensemble der Wiener Symphoniker, with whom she has recorded a CD in 2012 and performed at several venues, among others Bregenzer Festspiele and Opera City Tokio, since.

In 2010/11 Denise Beck´s international operatic career began when singing the part of „Grethel“ in Humperdincks „Hänsel und Grethel“ in Denmark and Norway. She also portrayed the role of „Frasquita“ (Carmen/Bizet) in Klosterneuburg/Vienna. Same year she received the renowned „P2-Talent-of-the-year-Prize“ (Danish National Radio Prize), as well as the Inga Nielsen Prize and she won the 2nd Prize for her interpretation of „Gilda“ in the famous Richard Tauber Competition in London.

In 2012 Denise Beck was honored with the internationally renowned Sonning-Talent-Prize. She sang the role of „Suzon“ on the CD-recording of the Danish opera „Fête Galante“ by Schierbeck, conducted by Maestro Michael Schönwandt, and with among others Bo Skovhus, Morten Frank Larsen and Michael Weinius.

Same year she sang the role of „Zerlina“ in a production in Denmark with Johannes Weisser as Don Giovanni.

2013 started with „Adele“ (Die Fledermaus/J. Strauss) in the Winther Theatre at the Operafestival Sotchi in Russia, a production with a cast from the Wiener Volksoper. In the Summer of 2013 Denise Beck debuted at the Bregenzer Festspiele in the role of „Papagena“ directed by David Pountney- a role for which she was praised in a.o. the New York Times. This production was filmed and released on DVD.

Apart from being invited back to Bregenz in 2014 to sing the titelrole in „l´Hirondelle du Faubourg“ by Simon Laks, Dénise Beck also starred at the Royal Opera in Copenhagen as „Amanda“ in Ligeti´s „Grand Macabre“, she jumped in as soprano-soloist in Nielsen´s  3rd Symphony “Espansiva“ with the Danish Radio-Orchestra in the Concerthall in Copenhagen- and was since invited back on several occasions.

She also started a cooperation with the contemporary Ensemble Zafraan in Berlin, she performed „Italienisches Liederbuch“ with Bo Skovhus, and portrayed the female mainrole „Leonora“ on the CD-recording of Carl Nielsen´s „Maskarade“ with a.o. Niels Jörgen Riis and Johann Reuter, the latter with whom she also recorded the Carl Nielsen Song-CD in 2015.

After receiving the „Else Brems“-Prize in 2015, Denise Beck sang the role of „Fiordiligi“ at the renowned Summer-Opera „Hedeland“ in Denmark. Same year she was invited to the operahouse in Oslo to sing „Pamina“ and to Concertgegouw in Amsterdam to sing the part of „Leonora“ with Maestro Marcus Stenz.

2016 Denise Beck sang the Soprano in the Matthew Passion by Bach in the Danish Dome, she performed in the Wiener Konzerthaus with the Strauss-Ensemble der Wiener Symphoniker, she successfully portrayed the role of „Musetta“ in „La Boheme“ conducted by Maestro Marcus Bosch and she performed Händels 9 German Arias and the "Salve Regina" with Maestro Eduardo Lopez Banzo.

Furthermore she performed "The Mysteries of the Grand Macabre" by Liegti with pianist Clemens Hund-Göschel, sh  had her Berliner Staatoper Debut in the titelrole in the opera "La Douce" by Emmanuelle Nunes, and she received the Danish „Axel Schiötz“ Prize.

2017 Denise sang the role of "Anna" in the new opera "Brothers" by Daniel Bjarnason and directed by Kasper Holten in Aarhus. With the Danish National Opera she went on tour as "Adina" in Elisir d´amore by Donizetti, followed by a great success as the leading lady in the Danish "Lulu" by Kuhlau at the royal Opera in Copenhagen.

2018 She performed once more with the  Zafraan Ensemble -this time as the protagonist in new piece called "Whole body like gone" in the Radialsystem in Berlin.

Hereafter she sang with the Scottish BBC Orchestra conducted by Thomas Dousgaard at a concert also with the Danish String quartet. This was transmitted live on the BBC radio. Furthermore she performed in "Le Martyre de Saint Sebastian" by Debussy conducted by Maestro Schönwandt, and she sang in concert with  the World Ballet on Tour in Denmark.

She is looking forward to singing "Adele" in "Fledermaus" at the Royal Theatre Copenhagen, and as soloist in both "Christmas Oratorio" by Bach in the Dome of Copenhagen and soloist in the "Messiah" by Handel with the Orchestra of the Age of the Enlightment.

She will end 2018 as a soloist at the New Years Concert at the Royal Theatre Copenhagen.

2019 she performed "Adele" and as "Blumenmädchen" at the Royal Theatre Copenhagen. Furthermore she starred at the Funen Opera in their seasonal presentation of the season 19/20.

Fall 2019 she was engaged as "Grethel" in Humperdincks "Hänsel und Grethel" at the Operahouse in Oslo.

2020 Denise Beck was hired to sing "Adina" in a childrens version of "Elisir d´amore" -a performance she concepted and directed together with tenor Mathias Hedegaard and Pianist Clemens Hund-Göschel, futhermore she was scheduled to sing "Sophie Scholl" in "Weiße Rose" by Udo Zimmermann, Soloist in "Die Jahreszeiten" by Haydn with the Aalborg Symphony Orchestra, and was supposed to perform with the Danish String Quartett at the Schleswig-Holstein Musikfestival - however the above mentioned were cancelled due to the Corona-Pandemic.

2021 she returned to the Royal Theatre as "Leonora" and also as "Valencienne" in the Merry widow by Lehar, as well as performed with Aarhus Symphony Orchestra led by Maestro Marc Soustrot. She also recorded a CD of known and unknown wokrs by P. Schierbeck and sang the role of Princess Guknare in a recording of "Aladdin" by Hornemann. Furthermore she jumped in at Landestheater Neustreelitz in the Role of "Rösschen" in the opera "Dornrösschen" by Humperdinck.

On December 3rd 2021 I had the great honor to become Knight of the Dannebrog Order.